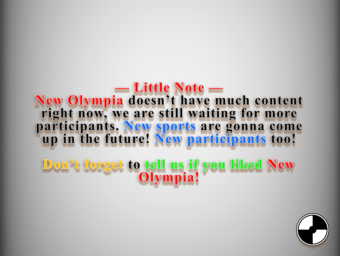 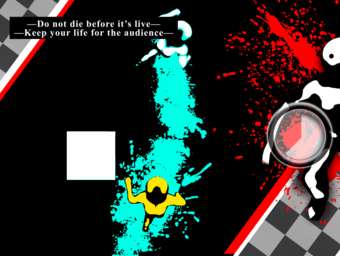 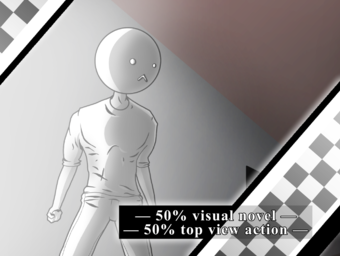 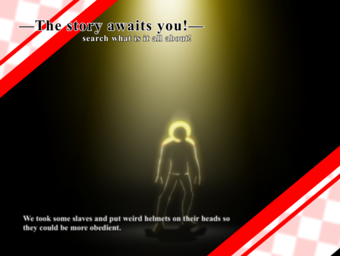 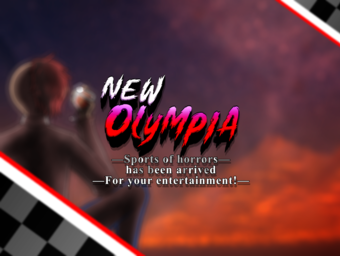 — Welcome to New Olympia! —
The new sports of horror has come for your entertainment! — New Olympia is a half visual novel, half top view action game.—

You are in a world where everything has collapsed, and where rich people has taken control of this world. These rich people created New Olympia, a place where the new sports of horror will happen. This event killed boredom of everyone living on the world, but a group of people seems to not agree with the New Olympia concept.

What is it all about exactly?
Discover the story while playing New Olympia!

— Ephemeral Note —
New Olympia has been developed for the hyperPad 2020 contest about sports. There are not that many content on it right now, but I managed to make something playable at least to give you. I could’ve spent more time on it to give it more content and release it sooner, but this method doesn’t fit to me. I really need to rest sometimes, and I wish you did rest too while working because it is really important.

The game is entirely made by me, I have to say it as the game cover a lot of features to it. I’m really satisfied and proud of myself doing all of this, I’m sure we could keep developing the game after the hyperPad challenge.
I also really tried to put everything on the artistic parts, because I know I’m not an amazing programmer, I wish I could be, but I know I can bring good universes in something.

There are a few bugs that I know that I’ve tried fixing before sending it to the hub, but I couldn’t fix anything and it kind of tired me. I would understand if you’re mad, I didn’t try my absolute best. But I can give you the list of bugs already known:

* Keep playing the "Earn or Die" game will decrease performance and get the app crashed at some point.
* Music that doesn’t syncs/loops well.
* The score is not reliable.
* Anything is not well optimized.

* **one crucial bug that needs to be fixed** The animations of the camera and the rotation of the character doesn’t work if the scene is preloaded, if the scene opens without refreshing it, if it opens/restart from an overlay. So restarting the scene is not possible yet, and better optimization are not possible too.

I hope these bugs could be fixed in the future. If you find new bugs in the game, please report it in the comments below. Don’t forget to give an upvote if you liked it, it would really means a lot to me. I love you all, be safe!

- fixed a lot of useless problems.
- changed a few UI textures.
- fixed some wrong typos all around the game.

@Aidan_Fire Haha yeah, I don’t know if I’ll keep that, I sometimes find it useless ( I dislike not being proud of me sometimes ). But I’ll try to keep it with the story but I’ll also try to spice the top down action more!

@Aidan_Fire Yeah, stories and graphics are what I’m great at, and I always try to demonstrate more of it. It obviously causes a lack of gameplay since I’m not focusing on gameplay, but that’s not what I aimed for directly. For the next times though, I will try focusing more on gameplay and level design, even if it will cause a lack of stories ( graphics shouldn’t change that much since I really enjoy making them and doesn’t really takes me a lot of time to make ). Like that, I bet I will be more experienced and will actually balanced my knowledge and skills. Thanks for the comments, I really appreciate it!

The gameplay isn't the best at the moment, but your graphics and ability to make up stories is really good.

Actually, you did say in it that it's actually 50% novel so this makes sense.

I finally got a chance to play this. It’s really good, I like how the sounds play a big roll. When the enemy character care and the sound changes it’s great. Reminds me a lot of metal gear solid in that regards.

The menus and overall interface is kind of confusing though. There’s a lot going on and I think if you simplify it then it would be easier to jump in and play.

I was really struggling with simplifying the game, cause I didn't really know what exactly the game was in term of genre ( is it a true horror game, an action game, a story telling game,... ), that was one of my first mistakes when I started this project ^^' But with time I actually knows better on where it's going, hopefully it will be more simple in the future to jump in and play!

And yeah, I was actually inspired by games like Dead by Daylight where sounds are really important ( I got the idea mechanic of the sound changing from Dead by Daylight ), I sadly don't really know about Metal Gear Solid games except of some memes, but I'll take a closer looks into it, it might inspires me :)

Thanks for the feedback, I really appreciate it !!

You should check out Metal gear Solid. I think you will really like it. They're very cinematic games with deep stories and amazing music and sounds. The first 3 are fantastic, (Original for Playstation 1). The music and sound effects do a great job at building tension, very similar to your style.

The gameplay is also similar, they're stealth games where the goal is to stay away from the enemy guards. Like an elaborate game of hide and seek. I'm sure you can get a lot of ideas from them!

I checked a little bit and I really like it so far! Thanks for sharing !!

Just to make sure I'm not missing something, there's only one sport at the moment, right?

I really like how polished the art and intro/menus are. I did notice a few typos/mistakes though, I can go through tomorrow and list them if you want.

There's not much gameplay yet but so far it's interesting, I'm excited to see where you take it.

Yes there is only one sport at the moment, I wanted to upload something playable as soon so people could get into the game quickly. There are more sports coming up for sure, but I rather like fixing some bugs and "clarify" things so it could be more easier for a new player to play the game.

There are a lot of mistakes in typos for sure as I’m not english native, I’m really sorry about that and it would be really kind if you list them really it would really help! I’m not closed to any gameplay ideas so you can tell me whatever ideas you think could be good for the game :)

I’m glad to hear that it is interesting so far, I’ll try to keep it interesting as long as I make the game. Thanks for the feedback! :)

Hm... I can't seem to find a way to clear my save data so I can watch the intro again...

I fixed some mistakes in the hub description: https://pastebin.com/raw/rfmKaFPz

And a couple things I noticed in-game: https://pastebin.com/raw/cnhaJK1p

Wow, thanks taking the time to make this! It's really well done ( really clear so I can understand what it's going on xD ) ! May I credit you for fixing those mistakes?

Also, most of the loading screen texts will be removed/replace by something else as I continue making the game.

I also thought making a gallery menu where you can rewatch every scenes of the game so far but I didn't have the time to actually make it, I really wanted to upload something quickly. But it will come in a few updates.

Thanks again for doing this, you're awesome!

Hahaha maybe true! 😂 But I saw a game that contained only a but of blood ( like this game ) and sometimes dismemberment that was PG 10 or 12. I think the game was called " The Cave ", a great game that I recommend! 😉

Hi so i really appreciate new Olympia the music,the universe I like all of it ! And well that’s all I didn’t played the level 10 and I hope I will complete it 😅.So that’s all and you did a great work on new Olympia!

Wow. 😶 I have no words. This is stunning! The music and the graphics fit perfectly together, and I can tell you've put a lot of effort into this! It's incredible!

The thing is that I can't beat the game with difficulty 1.. 😅

Thank you so much, I really appreciate that these things are being noticed, I'm kind of always scared that these won't be noticed honestly, but I think that I don't have to worry about it. HyperPad do have a nice community and I'm proud to be in it. Also for the level, have you tried keeping in touch with the square ? Or is the other character just too difficult to deal with ? In the first situation, try to keep touching the squares so you can fill them, sorry if it hasn't be clear I know I can struggle making things clear in English 😂. In the second situation I'll actually try to improve the character AI so it could be interesting. Also, I should add more new mechanics to the game such as counter to the other character so you can annoy them a little bit. And they could also have some sort of power up. It's just what it is planning yet but it can change, I'll try to find what fit the most with the game 😉 Thank you again for playing it, and thank you for the feedback!

I beat it, and i only bleed once

That's really good @SuperSean , I'm sure you'll be ready for the next updates 😉

Great game but how do you escape the other guy trying to kill you? It’s really hard and he doesn’t seem to go away. Did I just miss something? Anyways really atmospheric and intense game and I had fun!

There should be many strategy in the future to escape from other characters. The main goal is to full the bars of the white squares around the map, but getting away from a character is, for now, really simple. I can only suggest you to try blocking him on obstacles. But in the future, this strategy won't work if I can find a proper way to implement a path finding system to it 😉 Thanks playing the game, and also big thanks giving a feedback!